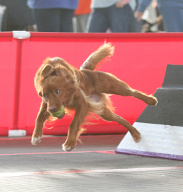 The members of Patriot Flyball have been participating in NAFA® flyball tournaments since the year 2000, when Lorraine Messier joined Canine Mastery Jumpmasters and Cindy Henderson formed the Weston Whirlwinds. Over the years Lorraine and Cindy were both competitors and friends, so when Lorraine formed her own club in 2019 it seemed natural that the two clubs should join forces.
The mission of the club is, above all, to have fun with our canine companions while training to be the best we can be and exhibiting good sportsmanship.
The Weston Whirlwinds Hurricanes (Gehrig, Henna, Remi, and Zak) were the 2018 CanAm Multibreed Division 4 Champions.
Regular Team Best Time (Patriot Flyball): 16.420 seconds, November 2021 (Winchester, Henry, Maris, and GG, jumping 8 inches).
Multibreed Team Best Time (Weston Whirlwinds): 18.479 seconds, November 2012 (Mattingly, Eika, Addie, and Zak, jumping 9 inches).
Open Team Best Time (Patriot Flyball): 16.434 seconds, September 2019 (Cedar, Gehrig, GG, and Thor, jumping 7 inches).

Flyball is a relay race for teams of dogs in which each of the four dogs on a team must run down a 51 foot course, jump four hurdles, trigger a "box" which releases a tennis ball, and return back over the hurdles with the ball. Each dog must run in turn and may not cross the start line before the previous dog has returned.

Races occur between pairs of teams running on parallel courses and are electronically timed; sometimes races are decided by as little as one thousandth of a second.

A fast-paced sport open to dogs of all sizes and breeds, Flyball is unique among dog sports in that it is truly a team sport - all the dogs on the team as well as their handlers must work together in order for the team to be successful.

Patriot Flyball Defense placed first in Regular 1, Offense placed second in Regular 1, Special Teams placed second in Open 1, and the Gridiron Gang placed first in Open 2 at our own Fun In The Sun tournament, June 18-19 at Gemini Dogs in Littleton, MA.
Offense (Cedar, Gehrig, Henry, and Zak) and Defense (Thor, GG, Quinn, and Nixx) basically duked it out for first place the entire tournament. Offense was slightly faster, posting a best time of 18.193 vs. 18.490 for Defense, but Defense was slightly more consistent, winning 29 heats against Offense's 24 heats. It was definitely all hands on deck when both teams raced each other, but it also definitely made for some exciting racing.
Special Teams (Revel, Winchester, Maris, and Violet) were up against some tough competition in Mass Chaos' Onion Rings, who were faster than the Patriot Flyball team (16.076 seconds overall best time) and just consistent enough to end up on top of the division. Revel ran in start because she had been having problems passing Maris in practice, so Winchester (ably handled by Carlos, on loan from Vanessa) moved to the second slot. Revel apparently liked running in start as she posted a new personal best of 3.906; the team overall just barely missed hitting 17 seconds, posting an overall best time of 18.038 seconds.
The Gridiron Gang (Rhys, Axl, Rocky, and Wicked with backup by Arizona) also ran very well. Wicked got in some solid runs, earning her FDCh-S, while Arizona (handled by Junior Handler Peyton) did admirably in her backup role for Wicked. The team was faster than its competition (posting an overall best time of 19.109 seconds) and managed to win just one more heat than the second place finisher - a little bit anxiety-generating at the end but enough to do the job.
The weather overall was good - just some rain overnight Saturday night into Sunday morning and cool, with temperatures in the 60s both Saturday and Sunday. The air conditioning at Gemini Dogs was definitely appreciated during setup on Friday, when temperatures were in the 80s.
The tournament itself ran fairly smoothly, except for some hiccups at the start. First, the jumps - the team had ordered a new set of 30" jumps for the tournament, and the manufacturer sent the wrong order - only enough bases and slats for one lane instead of two. Luckily Fire & Ice had a set of 30" jumps on site and graciously offered to loan them to us for the tournament. Second, the lights kept acting up, failing to flag early passes and generally acting flakey. Ultimately we discovered that some of the batteries in one of the poles were melting; once these were replaced the lights started working properly again.
A lot of effort went into making the tournament a success, and we owe a lot of thanks to a lot of people, including Nancy, who along with Keely and Ciara did a great job of running the table; Junior Handlers Keely, Peyton, Alex, Seb, and Linnea, who did great jobs running Gehrig, Nixx, and Arizona; Lisa and Courtney, who loaned us Rhys, Axl, and Arizona; and everyone else who helped us during setup and cleanup and during the tournament itself. Thanks also to Mass Chaos for supplying the mats and for helping us with getting them back into the trailer. It was truly a group effort and we appreciate everyone's help.
Pictures of the tournament can be seen here.

Patriot Flyball Offense placed second in Regular 1, while Defense placed first in Regular 2 and Special Teams placed first in Open 2 at the 2022 running of the Greenfield Derby, April 30 - May 1 at the Franklin County Fairgrounds in Greenfield, MA.
In the first running of this tournament in three years, all three teams comported themselves very well. Offense (Cedar, Gehrig, Henry, and Revel with a cameo by Maris) ran very consistently, posting a best time of 16.747 and slipping into second place only on the tiebreaker. Defense (Thor, GG, Quinn, Nixx, Zak, and Wicked) was also very consistent, posting a best time of 18.339 and giving Wicked a chance to earn her FDX and FDCh titles. Special Teams (Winchester, Maris, Rocky, and Violet with warmups by Poison) dominated their division, handily winning first place while they still had two races left in the tournament. All in all it was a very satisfying weekend.
Items of note were the gorgeous weather (a little windy on Friday night and Saturday, but no rain for the first time that anyone could remember), Henna coming out of retirement to run part time on BARK's for-fun veterans team, the box malfunction during the first race (it just needed a little lubrication on one of the plungers), and the mystery of the pineapple top.
Pictures of the tournament can be seen here.

Patriot Flyball Special Teams placed first in Open 2, while Offense placed second in Regular 1 and Defense placed second in Regular 2 at the 2022 edition of the Spring Fling Flyball tournament, April 9-10 at the Dover Ice Arena in Dover, NH. After a hiatus of three years it was wonderful to once again be running at this venue, one of our favorites.
Special Teams (Cedar, Maris, Rocky, and Nixx, with Thor and Revel as backups) were the stars of the show, easily outpacing their opponents and locking down first place before the final race of the tournament. Since Cedar was unable to be at the tournament on Saturday, Thor and Revel pulled double duty, running in start for Cedar in addition to their slots on Offense. Both dogs ran admirably; Revel in particular was very steady in her first ever assignment as start dog.
Offense (Thor, GG, Henry, and Revel with backup by Rocky and Maris and warmups by Wicked) ran very well the entire tournament. Rocky and Maris were thrown into the mix to relieve Thor and Revel, who were pulling double duty on Special Teams on Saturyday; despite the churn the team ran very consistently even though they were outclassed by their competition by almost a full second. Gotta keep them honest! Wicked did warmup runs during the entire tournament and looked very good.
Defense (Gehrig, Quinn, Violet, and Zak) were a bit on the ragged side, but settled down enough to pull out a solid second place in their division. This was the "all lefties" team - all the dogs and the boxloader were left handed. That doesn't happen very often!
Titles and other milestones:


Pictures of the tournament can be seen here.

In the club's first ever U-Fli tournament, Patriot Flyball Tailback placed second in Standard 1 while the Linebackers placed second in Standard 3 at Ruff Enuff's Shamrock Shenanigans, March 5-6 at Gemini Dogs in Littleton, MA.
This was the first Flyball tournament held in the Gemini Dogs facility since their renovation, and it was quite impressive. Crating was a little tight, but the racing venue itself was large and airy with plenty of runback. Ruff Enuff went all out with the frills, including complemetary (and impressive) breakfast and lunch on both days, as well as really great raffles (the team scored a couple of raffle items) and spot prizes (Angelica earned a boxloader prize).
Tailback (Winchester, GG, Breeze, Quinn, and Nixx) ran very consistently the entire tournament, giving the other teams in the division some tough competition but ultimately falling to second place on the fastest-time tiebreaker. Nixx was especially impressive running anchor, performing almost flawlessly and posting a personal best time of 5.3 seconds.
The Linebackers (Thor, Revel, Rocky, Zak, and Poison) also ran very well, matching the first place team's won/loss record but falling to second place on the tiebreaker. This was Revel's first tournament running consistently in the pack instead of anchor, and she did a good job of hitting and staying on her tug. Poison ran warmup in most of the races, but also ran a full five-heat race and earned her first ever Flyball points. Well done Poison!
Many thanks to Junior Handlers Peyton and Keely for helping out. Peyton did an impressive job running Quinn on Saturday when Renee couldn't be there, and Keely had some extremely tight passes running Zak part time on Sunday. Good job, and we hope you can both help us out again in the future.